A Bag of Booger Books: “go Booger-up a friend”

Booger-up.  It’s like leveling-up in video games.  But it just happened to you, in life.  So, what is this?  What does it mean? What should I do with it?  And why should I care?

At first glance, A Bag of Booger Books is exactly what it sounds like.  A woven cloth grocery bag of respectable quality and decent material with an icon of a booger family giving another booger family a bag of books.  And in that bag are multiple, signed copies, of my new children’s picture book, Where a Booger Goes.

Upon receiving the bag of booger books, the custom is to take one such for yourself and then to give the entire bag of remaining books to someone else.  Preferably to someone you don’t know very well. That’s called “boogering-up” someone.  You can never booger-up yourself.  It’s always a gift first bestowed upon you, then a gift which you give to another person you sort of know.

Maybe it’s the person you sit next to on the bus.  Or, maybe it’s that cute barista who’s working her way through a Master’s in Special Education.  Or, if you want to be really specific, give it to Anshul, that guy who works on the other side of the room in project management or something.  Not because he has a booger issue, but because he’s a kind and gentle person, so it will be easy to make him think he’s got a booger problem.

Think about it.  You got this bag for free.  You get a book, so you’ve gained something, but unless you really like this bag, which could totally be the case if you are in need of an entirely dependable cloth grocery bag, you don’t lose anything by giving it away.

And since you have already gained something, wouldn’t it feel good to make someone else feel the same sense of gain.  The fact that it’s someone you don’t know very well makes boogering-up all the more impactful for both you and the recipient.  It’s a way to pay-it-forward and make someone else’s day a little bit nicer.

Or, to Hell with boogering-up.  Give each book out to your best friends.  Why not?  If you happen to know of enough people to fill a bag of boogers with, and those people like things like books about boogers, just give them away.

Or, do you not like the book at all?  Does the idea of boogering-up a stranger offend you?  OK.  I hereby validate your objections.  But before you pitch the entire bag of books in the trash, which is just short of participating in a book burning, I have something for you to consider.  What if you gave it to that family you don’t really like. It could be a real snide, cutting backhanded slap, if you’re into those sorts of things.  And people who would throw books in the trash usually are.  It’s just math.

Or, OK, you’re going to throw them away.  You are an American (probably, unless you live in Canberra, Australia) you have that freedom, and by God I support your right to dispose of your own chattels as you see fit.

If you do live in Canberra, Australia, I’m not sure how much freedom you have.  Although, I bet your Santa must wear shorts because it’s summer in December in Australia.  So, you guys must be pretty laid back.  I’m picturing legalized cannabis, lots of “football” fistfights but no real murders, and certainly no gun violence or drunk driving.  No one’s wealthy, but no one’s really that poor either.  People feel comfortable sweating in front of strangers.  Lots of packed red earth.

So, upon analysis, if you do live in Canberra, Australia, you probably do enjoy the freedom to throw these books in the trash. But I’m also picturing environmental sensitivity on your part.  So, just to be clear.  Everything would go into the organics bin. Nothing in the bag or the book would go into the plastics bin.

However, before you do that, consider what you really know of Americans, based on first-hand experience.  For example, I know a person from Canberra, Australia.  One person I met at a wedding reception about 5-years ago.  That, and a Santa in shorts, is my entire basis for what I think life is like in Canberra, Australia.  So, we could safely say that I’m acting in ignorance.  But if I know so little about Australia, what do you really know about America?

By throwing these books in the organics bin, do you possibly risk offending some sort of unknown American sensibility?  If your self-image is that of someone who is culturally sensitive, maybe you don’t want to throw them away.

So, I’m assuming if you have read this far, you have decided that you will not throw the books away.  You might even be considering boogering-up someone right now. In fact, you might even become the Maven that is credited for starting a new trend.  Go ahead!  Take credit for the idea of boogering up strangers.  I’m OK with that.  My goal is to promote proper booger management.  I’m totally fine with you using this idea to promote yourself.

Regardless of how you got this far, I’d love to hear from you.  I’m really curious to see where these Bags of Booger Books go to.  When I was in grade school we didn’t care about the environment.  So, every year, we could write a letter, tie it to a balloon filled with helium, and let it go.  We got letters back from some crazy places.  My return letter was from Kansas.  I’m sure we helped choke a flock of dead birds worth of balloons, but back then, no one cared. So, think of these bags as my environmentally friendly way of sending out balloons with letters.

And if you enjoy the experience of being boogered-up and boogering-up someone else, you can do it again.  These bags are for sale in the shop here on this website.  The books are sold at a tremendous discount.  It might actually be a bigger discount than what I give to books stores.  I don’t know because I’m not good at math.

And if you send me an email with your order, I can write custom dedications before I send them out.  For example, perhaps you want them all to say, “From a hot mom, for a hot mom”, or, “I’m glad we’re both divorced because it means we can spend more time together now.”  Or, you can give me a general topic, and I’ll surprise you.  Or, you can just ask for a bag of Wildcards and you’ll get something special, just for you. 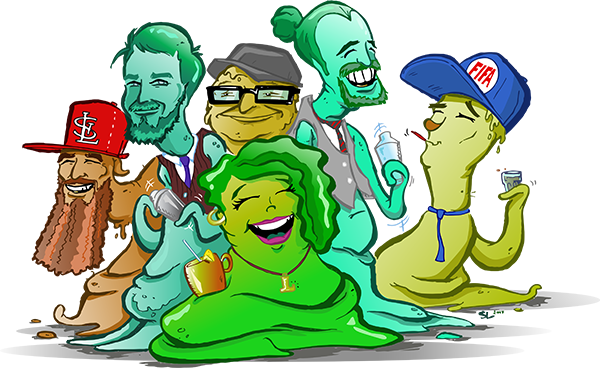